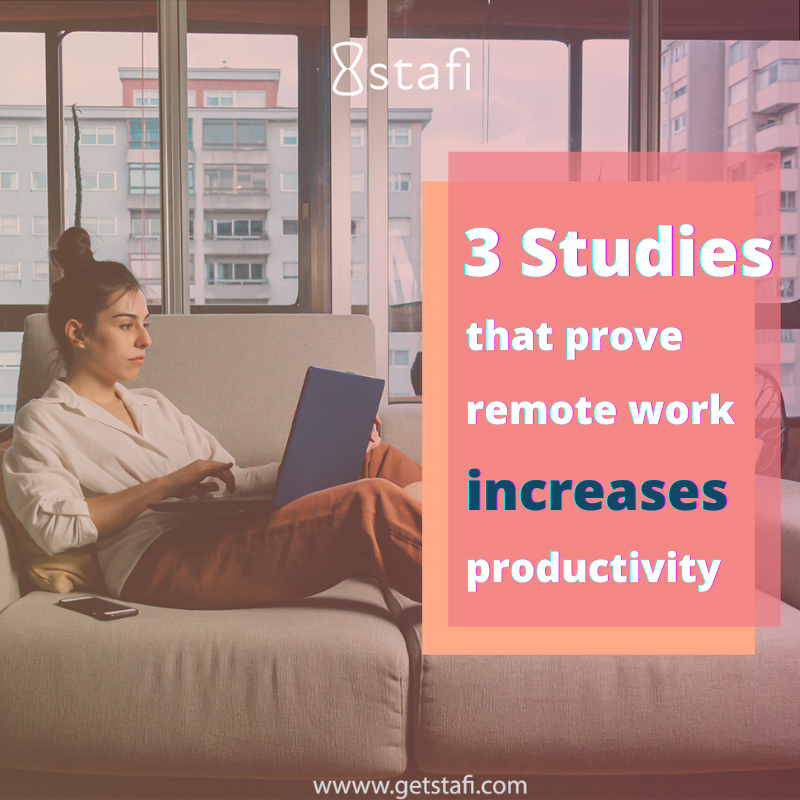 As remote work slowly becomes normalized, there appear to be a lot of doubts and worries, especially about productivity. Just like with any big change, we might not be sure if it’s the right fit for us and our business. If you’re still wondering about how productive remote workers really are, these studies might surprise you.

Here are three times data proved that working remotely can be not only as productive as being in an office, but even more:

The Texas A&M University School of Public Health published a study in February of this year. They analyzed remote workers’ behavior when they had to suspend in-office activities during Hurricane Harvey.

This study puts into doubt the misconception that remote workers aren’t doing as much as if they were in a physical office.

The research team analyzed the employees’ computer behavior before, during, and after Hurricane Harvey. This event forced employees to work from home for seven months.

The team found that, although the initial adapting period showed a small decline in active working hours, they quickly returned to the same computer use levels as before the hurricane. They continued showing the same behavior throughout the seven months. This data tells us that remote work does not impact workplace productivity in any negative way.

If you’re wondering about the initial adapting period where the declining data was found, keep in mind that these were employees that had no experience working from home. These were people that had to suddenly and unexpectedly adapt to such change against their will. They may or may not have liked the change, and they may or may not have had the capacity to perform in that modality.

Someone who has experience working remotely is already used to it and won’t show such behavior. Furthermore, people that choose to work like this, especially after the pandemic, are most likely individuals that tasted it and decided to stay that way. It suits them better.

In addition, this study concluded that “the ability to work remotely may improve the resiliency of employees to perform workplace tasks during events causing workplace displacement.”

Ctrip, the largest travel agency in China, was the subject of study for this experiment. Ctrip headquarters were located in Shanghai, where office space is extremely expensive and therefore hard to sustain. On top of that, the commute for most employees was very long due to Shangai’s high cost of living. Most of them lived in other towns nearby. So James-Liang, the CEO of Ctrip, thought of remote work as an option but had to prove that this move wouldn’t backfire on productivity and money loss.

This is where Bloom takes place in the experiment. He was in charge of designing a strategy to test the employees’ performance during the working-from-home period.

The 500 employees were divided into two groups. The first group continued working at the HQ. The second group was composed of volunteers who wanted to test the work-from-home modality. To be a volunteer, the conditions were that the employee had to have a private room at home, at least six-month tenure with Ctrip, and decent broadband access.

Bloom expected the results to be negative for the company, but he was shockingly wrong.

As part of the experiment, the workers from the second group (the home workers) were interviewed. They realized that the quieter working conditions at home made it easier for them to concentrate. Furthermore, the attrition levels dropped by 50% compared to the first group. Home workers also reported higher work satisfaction and they had more positive scores on their customer satisfaction surveys.

The company ended up not only increasing productivity but also saving almost $2,000 per employee on rent by reducing the amount of office space.

This company, whose first and only objective is to record working hours and behavior, has announced work trends during the pandemic. At a high level, the data showed a 47% productivity increase in 2020.

They evaluated 100 million data points from 30,000 users during March and April of 2020. Then, they compared that data to the same period in 2019. This is what they discovered:

Their research also showed the times and days at which home workers are more productive. Not every day is the same. We don’t feel the same on a Monday morning than how we do on a Thursday afternoon. Here is what they found:

The company assured that “The common assumption is that remote workers are less productive than those who are in a traditional office. But our ability to capture, integrate, and analyze workplace data shows otherwise. The biggest cost to business is real estate and people, and more detailed and actionable information about what employees are really doing and how their productivity at home can help companies challenge conventional wisdom and optimize for a more efficient future.

Having a virtual team can bring uncertainty at times, especially if it’s the first time you hire someone remotely. It doesn’t have to be that way at all. Having the right measures to conduct your activities with someone miles away is just as easy as having someone working next to you in an office.

The sense of control might feel threatened because you’re not watching them, and that might be a good thing. The long commutes, the office environment, or even having to wear a tie when requested, are things that can affect your team’s performance more than you’d think.

Plus, the cost of hiring someone virtually versus locally is way cheaper. Don’t hesitate to contact us for your delegating needs.

Stafi is your premier source for subscription-based virtual assistant services.